Rekindling the kampung spirit with technology

The spirit of the past
Decades ago, Singaporeans used to live in kampungs (villages), where it wasn’t uncommon for people to render help or support to their neighbours – it was almost like living with an extended family! This is what we refer to as the “kampung spirit”, having a strong sense of community and solidarity with our fellow Singaporeans.

From past to present

“Today, it is harder to see the same kind of kampung spirit among the new generation of Singaporean, and I strongly believe digitalisation is a key element in bringing it back. Thus, I’ve successfully launched the SGKampung app on the Apple App Store and Google Play stores, and I believe this app will be the means for Singaporeans to take baby steps in galvanising us towards bringing back the “kampung spirit”. - Khalili Bin Ismail, Creator, SGKampung

In the past, despite living under separate roofs, neighbours often interacted and socialised with one another, readily offering help, food, and support when needed. Today, one can easily live in isolation despite being in the same neighbourhood, by keeping to ourselves behind closed doors. Somehow, though we live in closer proximity to one another, this sense of togetherness has withered.

Khalili Bin Ismail and team created the SGKampung app with the goal of reigniting the “kampung spirit” through the power of digitalisation.

With the support of MCCY’s Our Singapore Fund, Khalili was able to successfully develop and launch the app. He was also able to garner marketing support from his Resident Network Committee.

The app offers users a multitude of services that allows people to interact and help one another. For example, under “Care Services”, you could create a request for someone to help take care of your child or an elder for a certain period of time, and other users of the app can see and reply to your request. The app even lets you loan, sell, or buy items such as furniture, household appliances, and more. For those who would like to get to know their neighbours and meet new people, there’s also a “Social Activities” category, where you can organise games, exercise sessions, Mahjong sessions, or initiate “chit-chats” with one another.

Preparing to join the Kampung

While the SGKampung app is live and ready to connect you with your neighbours -, the COVID-19 pandemic has taken a heavy toll on the app’s usability and marketing due to the COVID-19 restrictions. Khalili and his team are looking forward to having a successful islandwide launch of the app in 2022 with the relaxation of COVID-19 restrictions, allowing for more in-person activities to be organised.

In the meantime, the SGKampung team welcomes all monetary donations towards maintaining and further developing the app. It is their earnest hope that with the help of sponsors, the app will become the driving force in reigniting the “kampung spirit” amongst our people.

Khalili and his team would also like to extend their appreciation and thanks to MP Darryl David for his unwavering support, which enabled them to turn their vision into a reality!

If you have any enquiries or wish to support the app, you may reach out to Khalili and team at khalsd@hotmail.com.

SGKampung is available on the Apple App Store, and the Google Play Store.

SGKampung is one of the many initiatives supported by Our Singapore Fund. Have a great idea that that helps to meet community needs? Learn more about the grant and resources available to get you started: https://www.sg/oursingaporefund. 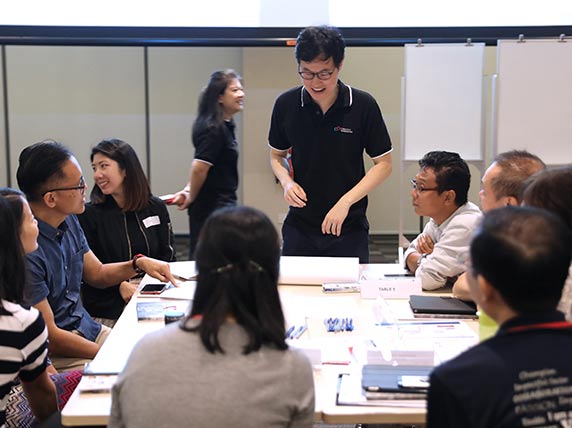